First some “Notices” – St Michael’s has twitter! Find us @StMikes_Exeter https://twitter.com/StMikes_Exeter . Also with little activity now in the Peregrine nest box, the live streaming has been switched off; it will resume with the next breeding season at the end of February 2015. The photo gallery is still there, and we plan to make videos from the 2014 season available on YouTube when time allows.

The main result of the YOC on Monday 14th July was a feast of music making on our new pipe organ from the 9 talented competitors for some 70 people gathered in St Michael’s. Thank you all. 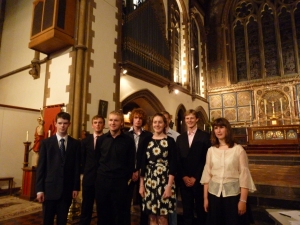 In the Open category, Eleanor Little, Joseph Gooddy, Josh Hughes, Katherine Whitcher, Laurie Kirkcaldy and Nick Tall, each played 10 minute programmes. They showed the full range of dynamics and tonal colours our new instrument can produce, both in what I as an amateur would term the classical German repertoire and a variety of more recent pieces, and each organist produced many moments of musical delight for us.

I particularly enjoyed the works by Rinck, Seeger, S S Wesley, Franck, Mathias and Boellmann. The judges were looking for choice of programme, as well as technique and musicality.

It was good to welcome the Chairman of Budleigh Music Festival, one of the sponsors of the YOC along with Exeter School and Exeter Festival Chorus. In a short interval, members of St Michael’s church choir sang familiar motets by Tallis, Pitoni and Parsons. New choir members are always welcome.

In the Advanced category, Jack Oades, Ralf Ayling-Millar and Rory Moules, each played a substantial Bach work and contrasting pieces by Langlais & Fletcher, Jeanne Demessieux and Edward Elgar respectively. All gave the organ a thorough work-out and the judges a very difficult task. 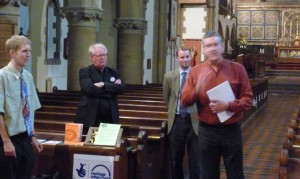 Alex and the Judges

While we enjoyed refreshments (thanks Sophie and team), our guest judges, Andrew Daldorph,
Simon Honeyball and Jonathan Watts, deliberated at length. They rightly commended all the competitors, reminded us that each had had only one hour’s practice on this particular instrument, and highlighted several excellent individual performances. 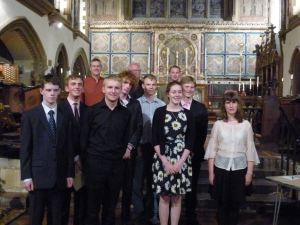 In the Open category they declared Eleanor Little as winner, with Nick Tall as runner-up, while in the Advanced category they judged Ralf Ayling-Millar as winner, but could not split Jack Oades and Rory Moules. 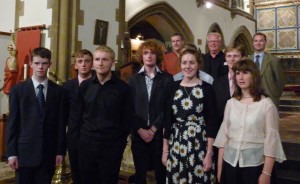 Congratulations to these, and many thanks to all the competitors, their parents and supporters for travelling to St Michael’s, to the judges for their work and feedback, and especially to Alex West, our assistant conductor and organist, for all his hard work in setting up the event and making it so successful.

On the evidence of Monday evening, the future of organ playing, and hopefully its place in the musical life of our churches, is in good hands.