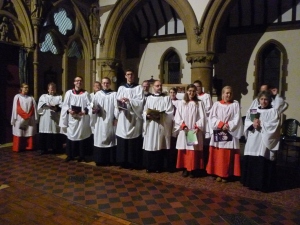 Our own church choir will perform in February.

Yes, it’s our own 20-strong Church Choir in Concert on Wednesday the 19th at 7.30pm singing a cappella sacred music on the theme of “Light”.  Recitals at St Michael’s, Mount Dinham, EX4 4EB, are free, with refreshments and a voluntary retiring collection to cover costs. Come and enjoy some of the best music from 4 of the past 5 centuries. 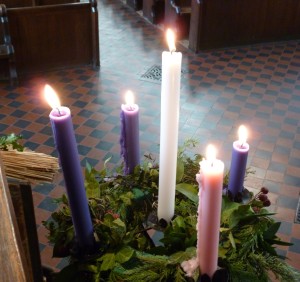 The arc of the 1st half is Advent – Mary – Candlemas

The themes of the 2nd half are Light – Remembrance – Evening

The concert is typical of the bimodal distribution of our weekly liturgical repertoire, concentrating on 16th century Renaissance polyphony and the 20th century flowering of Anglican music, with traces of 17th century Baroque and 19th century Romanticism.

We are also singing a similar concert in the Chapel at Tyntesfield near Bristol, BS48 1NX, on Saturday 22nd February at 5.30pm.  (Tickets are £10 from the National Trust there.)  The spectacular Victorian Gothic Revival House and Chapel were created by William Gibbs (1790-1875) who funded the building of both our own glorious church and the chapel of Keble College, Oxford.

The other Recitals in this series will be:-

A special inaugural recital on the newly installed St Jude’s/Clayesmore pipe organ will be given by David Briggs on Monday June 16th at 7.30 p.m. Tickets will be on sale nearer the time.

St Michael’s Church is a place of Christian worship and a lively centre for musical, cultural, heritage and conservation activities at the heart of the city of Exeter.

The Peregrine webcam in the spire was damaged in January’s lightning strike and has had to be replaced.   Thank you.