(A personal summary of the Funeral Eucharist for John Hughes, by Richard Barnes.)

I travelled to Ely, first stop on our honeymoon many years ago and where I have sung with visiting choirs on several occasions, with a heavy heart last Thursday (10th July) for the Requiem Eucharist for Fr John Hughes.

God opened his heavens to weep in Ely for the Funeral of John Hughes, Priest.

Ely Cathedral nave was filled with many hundreds touched by the full but all-too-short life of Fr John Hughes. The feelings of restrained sadness and the quiet conversations with friends before the service were helped by the sensitive organ music.

The booklet told us that with characteristic thoroughness most of the service had been planned and written down by John himself well in advance; John loved feasts, both sacred and secular, indeed, the best in life was all holy to John, so the Eucharistic Feast, foretaste of the heavenly Banquet, was the right form for his Funeral. God had started his work in him and brought it further than most of us in just half a lifetime; John was very Christlike. We were there to pray for John and that God would complete that life in heaven.

The 30 students of Jesus College Chapel Choir processed in silently, followed by at least 100 clergy representing every facet of humanity, united by black stoles. A bell sounded and the organ and choir began the heartbreakingly beautiful Introit from the Durufle Requiem.

The Altar party and John’s family preceded his coffin, simply adorned with a cross of white flowers, arriving under Ely’s octagonal lantern with the emotional Christe eleison.

The Bishop of Ely, Rt Rev Stephen Conway, welcomed all “much too soon” with barely contained emotion and conducted the beautiful service with quiet dignity.

The First Lesson, Isaiah 25:6-9, was least familiar but wonderfully appropriate so I quote it in full, read by a colleague, Prof Janet Soskice.

“And in this mountain shall the Lord of hosts make unto all people a feast of fat things, a feast of wines on the lees, of fat things full of marrow, of wines on the lees well refined.
And he will destroy in this mountain the face of the covering cast over all people, and the veil that is spread over all nations.
He will swallow up death in victory; and the Lord God will wipe away tears from off all faces; and the rebuke of his people shall he take away from off all the earth: for the Lord hath spoken it.
And it shall be said in that day, Lo, this is our God; we have waited for him, and he will save us: this is the Lord; we have waited for him, we will be glad and rejoice in his salvation.”

1 Corinthians 15:20-58, the promise of resurrection, was read by John’s cousin, Stephen Gilbert MP, and the Gospel promise that nothing is lost, John 6:37-40, by the unnamed Deacon.

The hymns, well sung by the large congregation, were a pilgrimage of faith:
I heard the voice of Jesus say – Kingsfold,
All people that on earth do dwell – Old 100th,
Guide me O thou great Redeemer – Cwm Rhondda
with a different emotional intensity and closer attention to the words than normal,
Now the green blade riseth from the buried grain – Noel Nouvelet,
Praise to the Lord, the Almighty, the King of Creation – Lobe den Herrn.

The Sermon, by Rev Dr Jeremy Morris, Dean of King’s College Cambridge, avoided any platitudes and was sprinkled with words like disbelief, anger, senseless and too soon, which will have been in many minds.

In an image both Biblical and Dr Whovian, he said that John’s death has torn a hole in the fabric of reality, across many groups; Cambridge colleges, Church of England, wide networks of friends, students and colleagues, and above all for his parents. (This will take time, prayer and work to mend, and will leave scars.)

The loss to theology, where John’s distinctive and creative ideas were already being noticed and admired by many, was immense. (There are too few young catholic theologians with his intellect, rigour and application to major issues in our society, along with such a broad, inclusive view.)

But that is the least of our losses, for John was above all a priest and pastor, a teacher and spiritual guide, a friend and helper, full of hospitality, and a beloved son.

There were a few smiles; were John’s first words to quote from Thomas Aquinas? His great love of people and parties, of feasts and good wine, as in Isaiah. His humour and wit, always with kindness.

Beyond John’s deep personal faith in Jesus Christ, he knew that religion, and Christianity in particular, was social, sociable and about society, focused on the sacramental meal which unites all the communion of saints, living and departed. And John was always giving himself to communities in college, church, friends, society.

Our Prayers, led by Rev Jeremy Caddick, Dean of Emmanuel College, were equally apt and sensitive, remembering the injured survivors of the road accident and all casualties, as well as John’s many circles of influence. 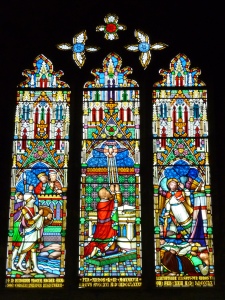 At the Offertory, according to John’s wishes, the collection was taken to support the church, religious eduction and the poor. Sanctus, Benedictus and Agnus Dei, were beautifully chanted by the Choir from the Missa Pro Defunctis.

During Communion, the College Choir, who were close to John’s heart and whose singing was confident, beautiful and sensitive throughout, sang Bainton’s great anthem from Revelation 21 “And I saw a new heaven … And I John saw the holy city” and Croft’s setting of the Burial Sentences from the Book of Common Prayer.

John’s coffin was sprinkled with holy water, censed and prayed over – Go forth upon thy journey, Christian soul – and carried to the west doors of the Cathedral during the Durufle In Paradisum, feelings rising especially for John’s parents. There the plainsong, Salve Regina Mater misericordiae, was sung; then all stood in silence.

The Lamb redeems the sheep

I was reminded that another gift that John was blessed with was a beautiful voice for singing the Liturgy, which he had used as a Curate with us at St Michael’s, intoning the Gospel, and singing the Exsultet for the Easter Vigil.

Meeting friends in the packed Lady Chapel over a cup of tea, we remembered St Michael’s choir tours to Norfolk, including Walsingham, and West Wales, including St David’s, with John as our chaplain equally at home over the kitchen sink, the communal meal and the communion altar.

To the implied question, how God could be so foolish as to take from us decades too early “the brightest and best …”, “the one whom we thought would …” to echo the Road to Emmaus, there is no rational answer, except to believe that John, like Job, would have asked it too, but continued serving the same God and his people whom he loved.

A link to the Church Times Obituary.